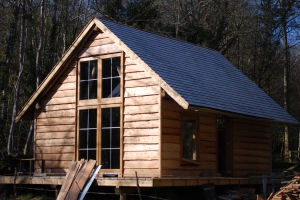 We held a conversation in the recently completed woodland shelter about alternatives to school.  Fifteen people attended between the ages of 4 and 75 – and including the leader of the woodland kindergarten and an ex-public school teacher – so different perspectives were included.  Emily introduced the event with a talk about her views on the problems in education, how schools are not the answer and offering our approach to involving children in the building of the woodland shelter as an example of an alternative way for children to learn.  In response, there was no shortage of ideas and debate.  And since the talk, at least one of the participants has ordered a copy of Illich’s De-schooling Society and developed some ideas on how he could pass on his wood-work skills to his sons and their friends.

'The only education worth having is growing up into a worth-while world' Paul Goodman, anarchist writer.